Alien: Storyboard of Space Jockey skeleton embedded in the rock (1978) by Ridley Scott references Resurrection of Christ (1424) by Master Franke a Radio Times publicity photo for Dad's Army and Gericault's Raft of Medusa ?

leading from
Ridleygrams
and
Alien: Storyboard of skeleton in the rock (1978) by Ridley Scott for Alien 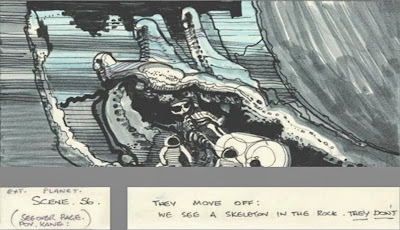 b) See: References Resurrection of Christ (1424) by Master Franke? 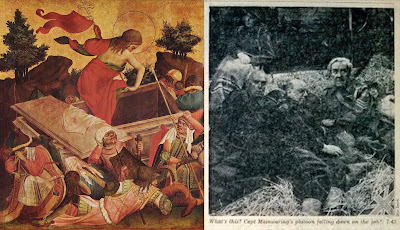 Probably not that much other than through the photo from Dad's army mentioned above, but the theme of bodies and desperation could easily be somewhere on the mind since it's a powerful painting and we have the skeleton of a dead 'space jockey' in the rock.

So one thing for me to point out is that I would be going along with the idea that the photo loosely played around with the layout of Master Francke's Resurrection of Christ, with a thought about the people in the photo echoing and saying the idea of the soldiers sitting around the tomb.

I think that Ridley Scott would have thought about this when he decided to reference it in the storyboard below with the dead space jockey embedded in the rock, then of course Raft of Medusa is another one of these paintings that seems to reference the same painting by Master Francke.

In Ridley's storyboard of the dead Space Jockey embedded in the rock, I suppose that the idea is that the remains have been petrified by time one way or just as its assumed about the final space jockey, and Medusa turned people to stone

Here it seems that this strange perspective corner view from  Resurrection of Christ crossed over into Gericault's Raft of Medusa, and all of the bodies of the soldiers sleeping became the men on the raft. The pole held by Jesus becomes the mast of this ship.

The tomb becomes the raft.