Alien : Evolution of Space Jockey via
the Egyptian Book of the Dead:
The Henu Barque
(AKA The Sokar Funerary Barque)

Part of:
Unlocking the design of the Space Jockey
&
H.R Giger's Egyptian Mysteries 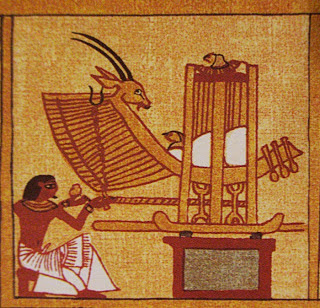 Henu Barque from Papyrus of Ani.

a)  Towards the Henu Barque
Giger appears to have taken the design of the Space Jockey in another direction far beyond Ridley's initial concept, for a good couple of decades I wondered what exactly it could have been, to me it seemed as if there was some completely unimaginable source of inspiration that took the the direction of the design into something incomprehensibly different.

If there was a mysterious sculpture or design to know about from the Ancient Egyptian traditions I didn't know about it.

There was absolutely nothing in the book H.R.Giger's Alien about this matter regarding the Henu Barque having not been mentioned at all in any of the known books or interviews with Giger but we know that he does draw ideas from Ancient Egyptian Culture from looking at his paintings.

We have seen his obvious use of the sky goddess Nut in the Life Cycle hieroglyphics tableau, and we can see enough from the image from Ani's version of the Book of the Dead to how this is a key structure that served as a basis for the Space Jockey and its chair.

Perhaps Giger's painting Necronom IV featuring the creature that inspired the main structure of the final alien life form design in the movie was also loosely inspired by the same images of the funerary barqur.

b) My introduction to the Henu Barque
I went to see "The Egyptian Book of the Dead" exhibition at the British Museum on January 14th 2011.

When I looked at the section displaying the the Papyrus of Ani, a very curious detail jumped out at me as it if were a strange creature with a rib cage extending behind it and a long legless trunk like body and an animal head at the top of the body supported by a cradle with three pillars.

I immediately thought that this could easily be the inspiration for Giger biomechanoid.

This small image was in fact a depiction of a sacred bark/ barge dedicated to the funerary god Sokar.

See:  Explanations behind the Henu Barque


c) Referencing multiple Henu Barques
Despite all we have discovered about the evolution of the space jockey's seat from the Necronom V painting through  Ridley Scott's storyboard, we can take a step back and examine Giger's final Space Jockey design and note the strange bulbous structure projecting from it's back and the three pillars that make the support frame connected to the runners of a sledge, have become the support frame for  the space jockey's telescope.

The presence of the horizontal structures such as the curving pipe as seen in the fourth image down on the right or if not, the sledge runners are likely to have inspired the horizontal pipes at the base of the Space Jockey's seat.

Giger would have been familiar with more than one version of the Henu Barque if the horizontal pipe at the bottom was based on the pipe shown in the second image of the funerary bark.

Other versions of the image of this type of Henu Barque found around the internet show a much larger precise image of the barge but with four pillars, but the writer here would perhaps find it less easy to recognise it as something transformable into a space jockey along with its seat. See link to images at the bottom

See:  Depictions of the Henu Barque.

d) Referencing a falcon head
Someone might have the view that if the boat images contained a telescope, it might seal the whole statement that this was the inspiration.

However I can only turn it around and look at Giger's earlier sketch for a space jockey chair design (see work 340c, Giger's Alien, p39  and the sketch of the detail below) where there is a telescope that might be considered roughly like a giant stylised falcon head shape ending with a sharp beak tip where the Space Jockey's telescope eyepiece would be, and on the barque itself, this is where a small falcon head would be found.

On the final painting, the space jockey's visor in conjunction with the shape of his helmet provides a stylised falcon like representation

g) Von Dänikenisation
This process of using a strange ritual image left behind from an ancient civilisation and re-imagining it as an alien in its pilot seat can be said to be cheekily labeled as "Von Dänikenisation" as if inspired by Erich Von Däniken's idea that the sarcophagus lid of the Tomb of Pakal Votan,
depicted an astronaut in a rocket ship cockpit.