A trail of film posters featuring triangles, with glowing pinks and purples 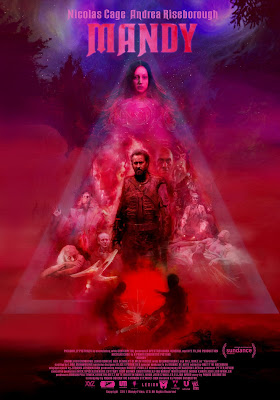 "Did all movie poster designers die or.." he wrote above the Hollow Body poster in his blu-ray post, and getting to the Mandy poster he wrote "I mean, c’mon" and then beneath the words "Not to mention", he posted  the " Bliss!"" poster.


b) By November he noticed that the poster for Kin displayed such similarities and typed "What!" comparing it to the images above. I have to say that when I was trying to buy a copy of the Mandy film on blu-ray in Fopp, I had some trouble trying to avoid looking at the cover of Kin mistaking it for Mandy because the colours and the idea of a triangle dominating the cover made them look too similar.

Devillefilm on Twitter responded by posting the old Force Of One film poster featuring Chuck Norris from 1979, that displayed a similar triangle, but without the dayglow effect,(https://twitter.com/devillefilm/status/1035776830760992769) to which David Hughes responded on September 1st the first by posting the poster for the film The Neon Demon from 2016, there was a film Neon Demon which displayed the triangular form.

d) But keeping in tune with these recent spout of similar posters, we might also look at this other Neon Demon poster from 2016, and perhaps acknowledge the cult status of its director Nicolas Winding Refn.

If it should mean anything at all, cinematographer Natasha Braier's view on the whole matter of triangles was to say  "We were inspired by the work of James Turrell. He’s a sculptor of light, but an architect too. His works become, for me, sacred spaces. That reference gave the triangle in The Neon Demon a subliminal touch of the spiritual as well." `(https://www.theguardian.com/global/2016/jul/04/inside-the-weird-world-of-the-neon-demon)


f) The use of triangles and pyramids in the film the void has been partially discussed in interviews about The Void, but Jeremy Gillespire who co-directed The Void mentioned that "All of this stuff relating to pyramids and triangles is left ambiguous, for the audience to interpret as they would, intentionally."
(See: https://exclaim.ca/film/article/the_void_jeremy_gillespie_steven_kostanski_suicide_squad_guillermo_del_toro" 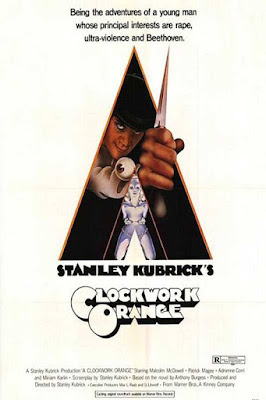