Jack Kirby's Lemurian train bomb
and
"The Treasures of Satan" trail through the 1970s
and
The biomechanoid that O'Bannon wanted?


a) Overview of the development of the painting
The story starts with Jean Delville's Treasures of Satan that references the zigzag devil petroglyph from the Bradshaw caves, and Salvador Dali appeared to have referenced it with his painting “Daddy Longlegs of the Evening - Hope!”, and the painter James Gleason understanding the connection between the two incorporated elements of both in his own painting "Galaxy".

During the Alien production, Michael Doret designed and drew a logo for Alien based on photos of production art based on the “bio-mechanical” forms that he saw in some publicity stills from the production and Pop-Surrealist Todd Schorr who would become a notable Pop-Surrealist. Curiously, echoes of Delville's Treasures of Satan would show up in the design.

Giger would then reference the painting "Daddy longlegs of the Evening - Hope!" in his work "Necronom IX". Later the comic book artist, Jack Kirby would reference both the Dali painting and "Necronom IX" in his comic book illustration of the "Lemurian Train Bomb", and Dan O'Bannon in his preproduction concept art for Alien would do a drawing of an alien monster based on Necronom IX which Ron Cobb would base another monster for the preproduction artwork on

With the idea of creating a sense of dimensionality to it, HR Giger would then come to paint Alien Monster IV as a winged dragon man, referencing Kirby's Dragon Man from the Fantastic Four comic books,  incorporating elements of Jean Delville's "Treasures of Satan ", Dali's “Daddy Longlegs of the Evening - Hope!", Gleeson's "Galaxy" Kirby's "Lemurian Train Bomb" from "The Eternals", his own "Necronom IX" and O"Bannon's Alien monster based on the painting. He would also incorporate the shape of a hand transformed into a gnarled wooden stump in "The Eternals",  elements from the relief by Gene Szafran as pictured on the cover of the Isao Tomita album, "Pictures At An Exhibition" and also traces of ideas associated with the scene from Lord of the Rings featuring the battle between the Balrog and Gandalf appear to show up in the painting, with the long fingered hand evolving from the huge demon's multi thonged whip.

Suddenly a suggestion of a human face in the Alien Monster picture demanded to be recognised. It wasn't JRR Tolkien, that's for sure, but the next thing to think about was word association after the revelation of the Balrog. Bal... Bal... J G Ballard? A photo of this author from a very rare Danish magazine fit the bill as reference material to be Picasso-ised.


b.i) See: The Delville in the detail: Discovering signs of Delville's work in Giger's paintings
My first experience with the work of Jean Delville and realisation that it had inspired Giger
and how it might have been transformed in Giger's mind into the resulting Alien Monster IV 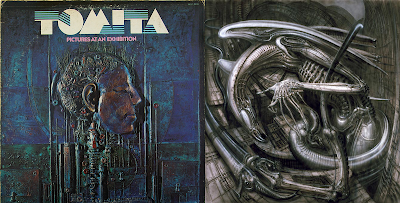 f) See: Alien Monster IV references the relief in the office from the Douvier office scene in "Revenge Of The Pink Panther"

The Revenge Of The Pink Panther was shot at Shepperton Studios just before Alien went into production. I assume this strange relief in the Douvier office set was actually part of a set at the studio rather than something found on location. But it appears as if Giger would have seen this, either in photographs or the actual relief itself was found somewhere on the set and was absorbed into his Alien Monster IV.  He could have been enthusiastic about this relief for all kinds of reasons as another relief he was going to use in a project, but who actually created it and what it might have referenced if anything at all itself is another thing, because not everything does. It looks roughly like two people pulling something, perhaps pulling fishing nets out of the water against a sunset

g) 14th June 2016: Ticket for the Jack Kirby's Lemurian Train Bomb
Jack Kirby's Lemurian Train Bomb from The Eternals and with great surprise I realised that the drawing referenced Dali's "Daddy Longlegs of the Evening - Hope!'" and also Giger's Necronom IX. And then for Alien Monster , Giger would also draw on details from The Lemurian train bomb into the mix that would become Alien Monster IV.

j) See: Alien Monster IV painting from a Kirby drawing from The Eternals 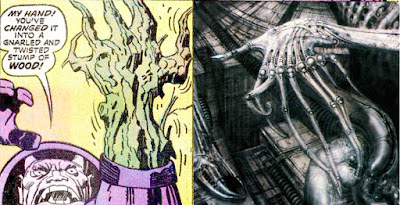 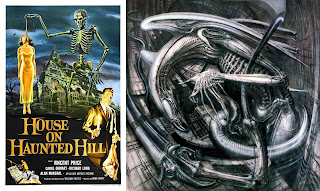 l) See: The hand of Alien Monster IV Possible inspirations behind the hand of the beast

m) See: Alien Monster IV; Atrophied remnant of the battle between Gandalf and the Balrog in Moria (alien hand as whip)

o) See:  References page from The Eternals #7 (January, 1977) showing Gammenon and Jemiah the Celestials in their Hemispherical dome, by Jack Kirby (which I believe also references the photograph from Jannick Storm's Limbo) 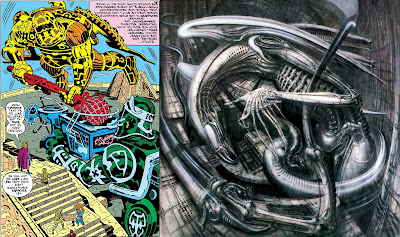 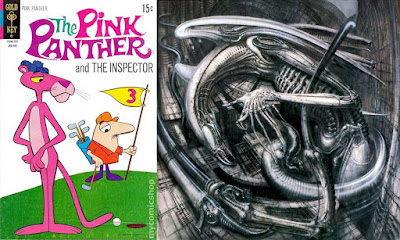 r)  Wifredo Lam's Gravure Uno (1967)
Did Giger reference Lam's painting along with a number of others that appeared to reference Delville's work when he painted Alien Monster IV.  Taking into note the long whip like fingers of Lam's central figure that might start making one think about a balrog and his whip but this time merged with its hand. 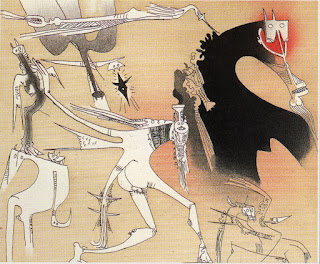 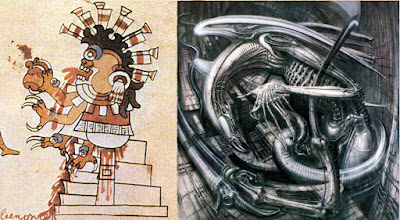 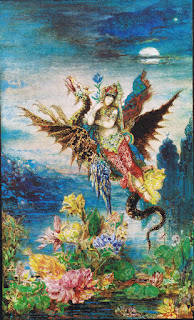 w) Satan Tails
The remnants of the zigzagging tail in the top left corner of Alien Monster IV could well have evolved from the tails of Gustave Moreau's dragons, the zigzagging tentacles of Zigzag devil and from Treasures of Satan,  the trail of smoke or water weed in the above of Celebes, and the bull's tail from Guernica, the caduceus like tendrils at the bottom of the unused Alien logo, and in Giger's painting , it could loosely double for a remnant of the flaming Balrog sword