Alien:Afterthoughts,
and
Paintings that inspired design of Alien
and
Giger's Necronom series


a) Descriptive thoughts
When I first took a hard look at Necronom IV when I bought Giger's Necronomicon back in the 1990s, I thought about how it resembled a cross between a deep sea fish and a motorcycle fused with its rider, and indeed the goggles worn on the head would be its motorcyclist goggles, perhaps it's a deep sea diving suit that's also in itself a mini-submarine travelling through the polluted oceans.

Its phallic tale becomes an angler fish's bioluminescent esca but containing a skeleton inside, perhaps on one level as a sort of a death rattle and another as a passenger in his observation bubble connected by a tube.

I began to think about how this was a large semi humanoid vehicle its head was in some ways a sarcophagus with it's occupant fused with it's outer casing. I'm willing to imagine the thing with centipede legs or caterpillar tracks beneath the bottom of the painting

b) Seeds for the creature
Over the years through further exploration, I think that I have becomet amazed though about how many possible sources Necronom IV seems to have. Giger did manage to talk about how his Necronom paintings were sort of post apocalyptic environment suits.

But there was a very curious sketch that Dali did back in 1972 that he called Nefertiti and it was a female naked form with a skull face, elongated head and spikes coming out of its spine that looked curiously "Alien" like.

There's also the Angel of Darkness by Ernst Fuchs that has an elongated head, spindly limbs and two wings and two sheets of material that could be false wings that looks like a starting point as well. Since Swiss Made 2069, he started thinking of developing the idea of a biomechanoid environment suit which was also soon after the TV series Doctor Who showed some incredibly interesting alien monster suits such as the Cybermen and the Ice Warriors.

Perhaps he saw Walter Pichler's TV helmet on the way and wondered how how far he'd dare elongate head of one of his imagined environment suits. As a foundation for the general form of the image I assume he started with the face of a golem as drawn by Hugo Steiner Brag for Meyrink's The Golem.

c) Elements that make up the creature
And then when Giger constructed Necronom IV, he gave the thing shoulders like an Egyptian lion, and a tail straight out of the Egyptian Book of the Dead's mummification ritual image with lion couch, with the head of the beast placed in similar position to the back of the bent over Anubis in relation to the tail, and the general outer form is shaped into an inverted Eye of Horus with the pipes resembling the eyebrow and also the dip in the pipes along the head form a sort of a false eye shape making it resemble the head of a Was-sceptre, perhaps noticeably one found amongst the treasures of Tutenkhamun.

Also I believe he took inspiration from shapes and forms in Ernst Fuchs painting The Triumph of the Sphinx and the face of the thing bears the membrane covered mouth and the goggle like eyes from various depictions of the extra-terrestrials that abducted Barney and Betty Hill in their UFO abduction experience.

Another side to this also is because Giger started to draw some interesting cartoons featuring the Alien later in his career up to strange thing, eating fondu, having sex, skiing on slopes, it began to make me think of the Pink Panther from the cartoon and so perhaps he might have been looking at the comic books. I thought about it before but its coming to the surface since the weekend of the release of the Black Panther movie in the UK and the other week I watched a Pink Panther movie on television. The snout becomes its head with the nose becoming its eye and the eye of the pink panther becomes the pipes handing downwards half away along the head, and this is a sort of an Egyptianised Pink Panther. Meanwhile the skeletal form at the end of the tail might as well be the remains of Inspector Clouseau whose face might also be his upper torso and upper arm.

d) The basis for the beast in Alien
In the final movie beast of Alien we have this thing with a ferocious mouth and four strange pipes coming out of its back that Giger briefly in his confusion refers to as wings in his Alien diaries and a large tail that sometimes comes out of the front of its body looking as if it were a long male member sticking out, we might take a look at the interpretation of Pazuzu as seen in the movie The Exorcist which is a four wing humanoid with a ferocious lion face and teeth, and a long erect male member sticking up at the front and the segmented cheek that perhaps show up on the final Alien as if they were foetal eyes connected to pipes and see the similarity with the Alien.

Well, it is a bit curious the way the ideas seem to be pushing back and forth between one thing and another, merging together while perhaps echoing other things not consciously intended is fantastic, it's enough like a labyrinth trying to follow the possible sources  but such is the wonder of his surrealist mechanism.  I suppose when one is presenting the alien, one is presenting all these different symbols together as well and perhaps what they represent.
Curiously a drawing by Moebius of one of his Arzach style characters revealed to me that he was aware that Giger had referenced Goya's "Saturn Devouring His Son" and this connection echoed through a Pink Panther illustration of the Pink Panther and the Inspector sitting in a van, and later an Alice In Wonderland drawing of Alice with a flamingo by John Tenniel that both appeared to reference the Goya one way or another.

f) Giger's own after-thoughts
Giger's afterthoughts about this painting, separate from what it became in Alien, was a view about how his creatures have such a bony and kind of hard character, which might be garments or indeed body parts because he is probably through armoring himself searching for protection. From the outside perhaps he is sealing himself off or defending himself against attack from the outside because he was vulnerable. Then it appears the thing is giving birth to a baby, because babies are so delicate and incredibly vulnerable, like almost no other creature in the animal kingdom where the young ones usually are much stronger, less vulnerable than human newborns.

iii) See: Vestigial remains of the Eye of Horus
iv) See: Was-Sceptre, the head of the alien?

5)  See: Mickey Mouse referenced in Wifredo Lam's Femme-Cheval which is referenced in Ernst Fuchs' "Triumph of the Sphinx" and Necronom IV references them all ? 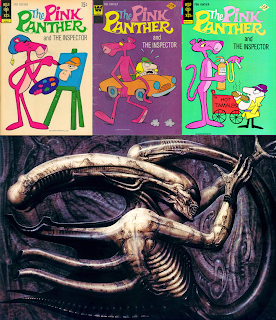 13.)  Development via Goya's "Saturn eating his son" via Alice and the flamingo from Lewis Carroll's Alice In Wonderland (Published 1865) by John Tenniel and the cover of Pink Panther #13?

14) Referenced in Moebius' illustration for the Temps Futurs catalogue from 1976?

16) Other things developed from Necronom IV