still collating
a)  Working out the order of things
When Giger took a look at Cocteau's pastel drawing "Reveries of Opium" which had been dedicated to Jean Marais, he saw various possibilities in its faces turning into ribbons and the vaginal form on the lower right, and turned the image into a uterine rollercoaster referencing images from certain works of Kubin, Dado and Fuchs.

b) Mutating Spectres of the National Park
(April 17th 2015), I looked at National Park, and absorbed the fact that we find we find spectral bird like heads, humanoid skulls some of which are swollen. Mutant animals are to be found integrated into the environment. And of course most of the things found are connected together by snaking.

e) Humanoid with body made from vagina beans
17th April 2015, I explore how to the left at the top, a humanoid face with eyes hidden beneath a helmet and a pipe grows from his chin, then it is as if the head forms the beginning of a vertical row of objects going down that resembled bean like forms with vaginas leading down to a half formed body of a pig like creature with human buttocks but no head obvious head. An enclosure is formed by the metal barrier at the base of the painting.

11th February 2015. Over time I have been thinking about the lower bean and how it suggest me of a cross shaped vagina which would end up as the spore opening form in the movie Alien
f) See: Multi limbed Biomorph
g) See Face mutating into bird skull by way of Salvador Dali
h) See: Gigers' National Park takes inspiration by Dado's  "Tribute to Cazotte" 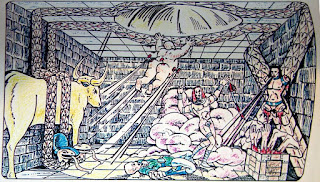 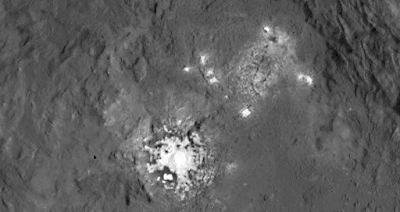 p) It's October 10th 2020, someone posted a picture of an Alien pinball machine on Facebook it started me off thinking about associations with pinball machines and then how while National Park before made me think of a rollercoaster, it also reminded me of an exotic pinball machines from years later with their additional twisting wire ramps and shoots etcetera for the balls to rush around. Perhaps another layer of what this painting is the future of pinball.
The play area of a Funhouse pinball machine from 1990 (source: https://commons.princeton.edu/josephhenry/brief-history-of-pinball/) 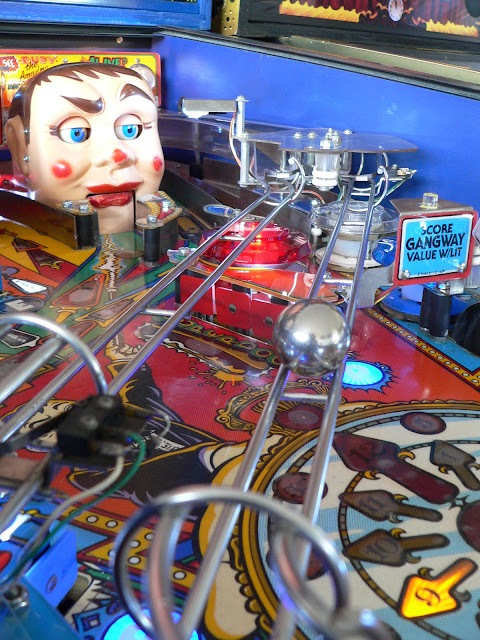 Below is a much clearer version of Giger's painting "National Park" from 1975.