a) Introduction to the Radio Times and TV Times
HR Giger spent a most of 1978 in England, and during this time was introduced to the wonders of the "The Radio Times" magazine filled with photographs and illustrations along with program listings for BBC television and radio.

It was as it were a super-highway of the British collective consciousness as when they were only focusing their minds on hand full of TV channels including BB1 and 2, ITV and later Channel 4.

It would be a magazine found in most households along with the TV times for the ITV channel and later Channel 4, until satellite TV introduced dozens of TV channels for the public to choose from.

There was also the TV times magazine for channels such as Channel 9, and later ITV instead along with  Channel 4

b) Giger's use of the Radio  Times and TV Times
From 1979 he started integrating aspects of various photographs and images into his painting from then on and the decade following.

Some images were from some time before his time on Alien, so it would seem that he was being presented some of these things by someone else who was collecting. Was there an second hand magazine shop at the time for him to visit?

What shows up in his work are such things as a photographic composition for an article about the scifi TV series Doomwatch from 1970 that looked as if it should be interesting to Giger, an image advertising a J G Ballard documentary from 1971 that would have interested Giger as a J.G. Ballard fan, and curiously there was a  cover showing architecture from Hindu Kush valley from 1976, as if people had these tucked away somewhere and were giving him their old copies, or perhaps copies were lying around the pub where he stayed or Shepperton studios

After his time on Alien, I might wonder if he had found a place to buy the magazine in Switzerland, continued to receive a subscription from England, or indeed a friend from England was continuing to send him cuttings over time, but it seemed as if he was using any editorial that looked in the slightest bit interesting as visual reference.

We might be talking in terms of dozens of images from the magazine being integrated into his works over the years, but the other side to that is that whatever magazine he found interesting images in for his work, the final paintings that he would create would still be his individual work that no one else could create.

work 385) ii)  Landscape (1978) for Alien references photo of Doctor Bronowski at the Salk Institute in the Radio Times for November 3rd 1973? 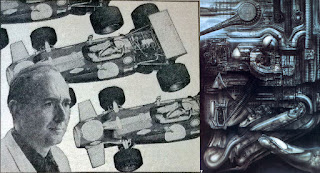 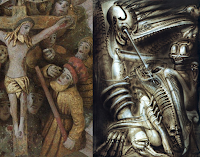 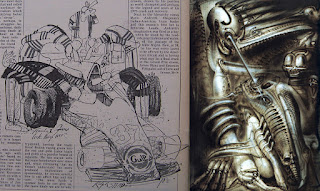 work 515) Victory IV and other paintings in the series references Felicity Kendal photo in The Radio Times 19th April, 1981. 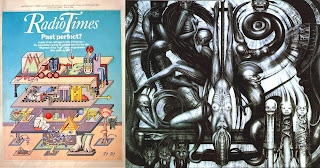 work 585) The Saxophonist (1986) references editorial illustration by Arthur Robins from the Radio Times from 23-29th April 1983 for the Eurovision Song Contest?

work 597) Biomechanical Landscape I (1983) also references Lesley Buckingham's "The Dog Who Ran For President" illustration from The Radio Times in 1997?